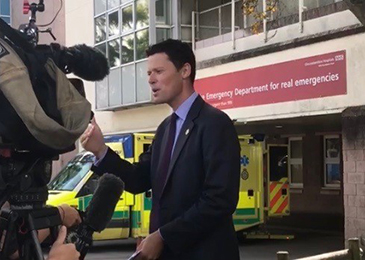 The Secretary of State for Health and Social Care, Matt Hancock yesterday made a statement to the House of Commons regarding the future of Cheltenham A&E in response to a question from Alex Chalk MP for Cheltenham. The statement can be viewed on Alex Chalk’s Facebook page here.

In the statement Matt Hancock stated that having spoken to the Gloucestershire health managers, closure of our A&E has been taken off the table and will not form part of proposals put out for consultation in the New Year. This of course on the face of it is excellent news, but REACH remains cautious that beneath the many statements issued by Gloucestershire Hospitals NHS Trust, there could still be an intention to downgrade Cheltenham A&E further from its current state.

“This is truly fantastic news, and a tribute to the the fighting spirit of local people. I am so grateful to the 20,000+ residents who signed my petition and the hundreds who responded to the engagement. This would not have happened without your incredible support; I have no doubt that the sheer weight of numbers made all the difference.

Special thanks too to cross-Party campaign group REACH, who have been working on this for many years – ever since the 2013 downgrade. Their efforts have been amazing.

There will be more fights to come I’m sure. But let us today celebrate a great day for Cheltenham and everyone in Gloucestershire who cares about local health services”.

“On the face of it this could be excellent news and to have this issue being debated at such a high level is also good news. At REACH though we still remain very concerned that lying beneath the assurances given by Gloucestershire Hospitals NHS Trust may still be an intention to downgrade Cheltenham A&E. Were this to be the case it would be unrecognisable to any normal person as what they would consider to be an A&E Department, whilst of course the Trust would still insist that they had not closed A&E. With this in mind we do not intend to let down our guard. We will still be calling on people to complete our survey and show their support in whatever way they can, both for the protection of Cheltenham General A&E but also other services at the hospital”.