REACH insight into the “Fit for the Future” Citizens’ Jury 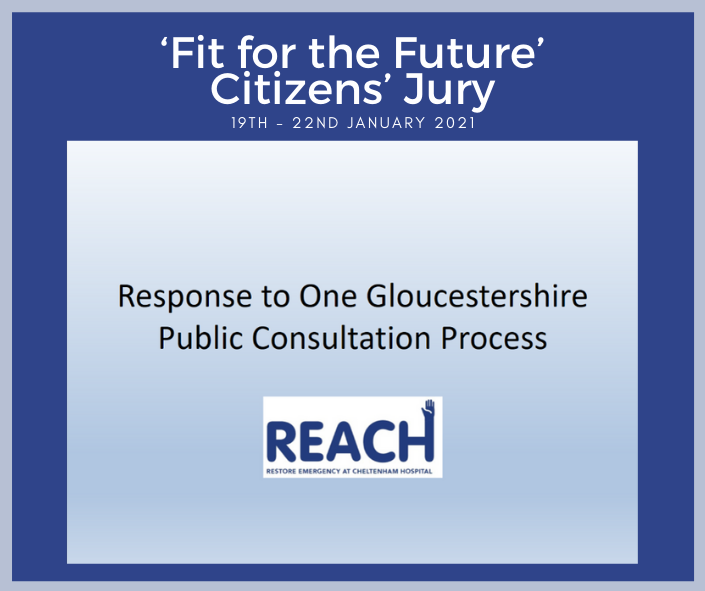 Two representatives from REACH presented to the “Fit for the Future” Citizens’ Jury on Friday 22 January. One of our team has shared his insight and perspective on the experience and process here.

The Citizens’ Jury met from 19 to 22 January and will meet again from 25 to 28 January.   It is not considering the clinical proposals in the ‘Fit for the Future’ consultation, but only how effective the public consultation process had been.  In that context it is bizarre, in the eight days it is sitting, only one hour was set aside to hear from representatives of community organisations.  The rest of the time is given over to health service managers telling the Jury what a good job they have done in consulting the public!

It may have been that only three ‘community organisations’ responded to the invitation to address the Citizens’ Jury, but that in itself is evidence of the total failure of the ‘Fit for the Future’ process to engage with a majority of the community!

Indeed, even of the three ‘community organisations’ who presented, one of them was a senior clinician in the Hospital Trust who is the staff Governor for Medical and Dental staff.  Although he clearly represents a section of the hospital community and had every right to present to the Jury, he is hardly representative of the wider public.

The two representatives of genuine community organisations which presented were Angela Gilbert of Gloucestershire Rural Community Council and the Know Your Patch network and Julius Marstrand and Chris Hickey of REACH!

Each community organisation had only 10 minutes to present their case and then had 10 minutes for the Jurors to question them.  These times were rigidly enforced.

REACH stuck strictly to the brief of talking about the effectiveness of the ‘Fit for the Future’ consultation.  We explained what REACH is and who we represent.  We didn’t think it was necessary, in the 10 minutes allocated to us, for us to highlight the strengths of the consultation.

We highlighted to amount of information One Gloucestershire had produced to support the consultation, including the 7pp ‘Easy Read’ version, the 30pp ‘Summary Consultation’, which is what most respondents would have seen and the 63pp ‘Full Consultation’.  In addition there was a comprehensive Pre-Consultation Business Case, which very few people were likely to read, with 38 separate appendices.  In total there were 1,211 pages!

We talked about the total failure of the proposed clinical reconfigurations to take ANY account of the current pandemic and the effect this and future pandemics will inevitably have on the future shape of the NHS.  We also said it was wrong to persist with this public consultation in the middle of the worst pandemic in living memory.

We talked about how the public consultation was manipulative in the way it excluded the overwhelming majority of the population of Gloucestershire from participating effectively.  We had analysed the reading ages required to fully understand the consultation documents (using the standard Flesch-Kincaid Reading Age test) and this made it difficult for many people to fully understand what was being proposed and the implications were.

We also demonstrated how it was manipulative in the selective way evidence from the lengthy Pre-Consultation Business Case was used.  Critical information was buried in the PCBC, some of which could only be understood by clinical experts.

One key example of this was the failure to include a statement from a South West Clinical Senate report on the future sustainability of the A&E Department at Cheltenham General Hospital, once that has been restored in the event of the five clinical areas being reconfigured.

Another was the failure to mention that two of the models for reconfiguration would result in a shortfall of 27 or 39 beds in Gloucestershire Royal Hospital, at least until Phase 2 of the ‘Fit for the Future’ programme is implemented in a few years time.

We concluded the ‘Fit for the Future’ consultation had been an attempt to manipulate public opinion by omitting critical information on potential downsides of the proposals from the documents the public was most likely to read and to ‘smuggle’ major reconfigurations through without proper public scrutiny.

Despite spending a huge amount of time and effort on the public consultation, the participation was very low, compared to the adult population of Gloucestershire of 450,000, with a little over 700 responses.  With far more limited resources REACH got more than half of that, mainly from Cheltenham and North and East Gloucestershire, with an adult population of under 200,000.

Probably the strongest reaction was from a Juror who commented that REACH’s presentation was “Stunning.”  It was the first presentation the Jury had heard (in four days) that had “rocked the Jury our of our seats.”  There were other positive reactions.  Another Juror asked one of the other presenters if they agreed with REACH’s point that the public had “only been told half the story – it makes you wonder”.

The questions we were asked were sensible, two Jurors asked us how it would have been possible to do more to raise awareness of the consultation in the middle of a pandemic and how the communication could have been improved during the lock-down.  However, if anything this merely reinforced our point about how inappropriate it was to persist with the public consultation in the middle of a pandemic.

Angela Gilbert explained how GRCC and the KYPN had tried to help One Gloucestershire to get the public consultation out to members of the community who are often excluded from participation in things which affect them as much as anyone.  GRCC and KYPN really only acted as a conduit to getting information about the public consultation out into some of the more difficult parts of the community to contact, but they were not really representing that community.  In response to a question from one of the Jurors, Angela said that KYPN had had “no input into the consultation itself”, either on their own behalf, or on behalf of the people they were representing.

They appreciated the efforts One Gloucestershire had made to attempt to communicate with hard-to-reach members of the community, with the ‘Easy Read’ version of the consultation, although they also pointed out online access to this was hidden low down on the ‘Fit for the Future’ one page and it was necessary to scroll down to find it.  They were asked if they had reported this, but they hadn’t.  They also acknowledged that no specific attempts appeared to have been made to communicate Gloucestershire’s visually or hearing impaired communities.  Furthermore the consultation had not been offered in other languages, despite the large BAME communities in Gloucestershire.

Angela appreciated the support One Gloucestershire had given for meetings with local KYPN representatives, originally in person and later virtually.  However, they had no metrics of how successful they had been in involving those people.

The best thing that can be said of one hour in eight days of presentations and deliberations of the Citizens’ Jury was that it may have given the Jurors a different perspective on the public consultation process from that given by Health Service managers over the remaining seven and a half days!