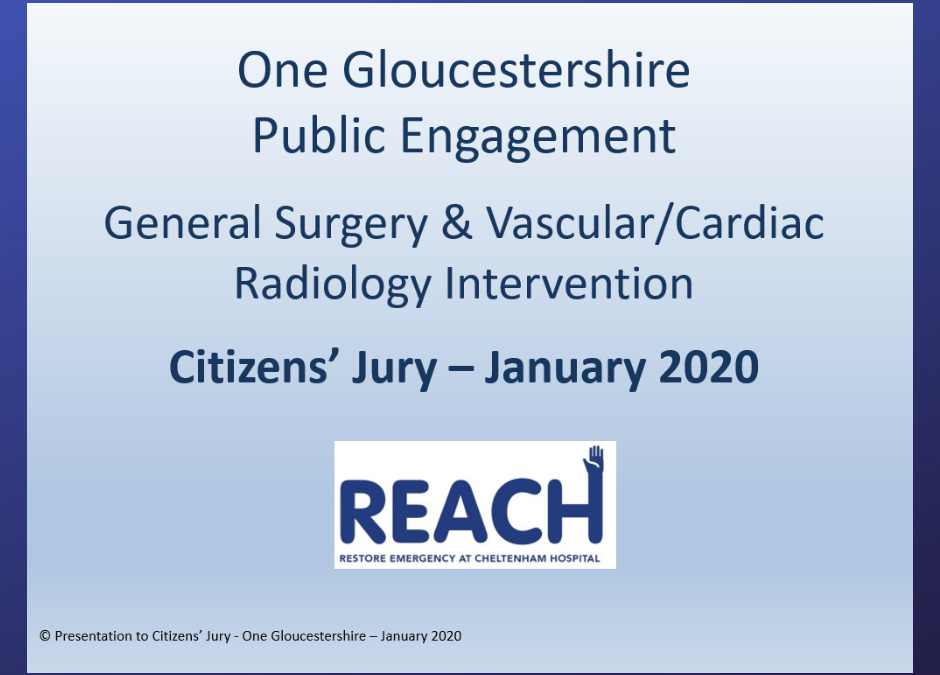 The final stage of One Gloucestershire’s Public Engagement ‘Fit for the Future’ was the Citizens’ Jury.  That had been scheduled to take place in December, but had to be postponed due to the ‘Purdah’ rules surrounding the General Election.

The Citizens’ Jury spent four days, from Monday 20th to Thursday 23rd January, listening to evidence from NHS Managers and Clinicians about the proposed reconfiguration of services in Gloucestershire, with the final day, Friday 24th January, reserved for their deliberations and to produce a report of their conclusions.

Only two community representatives applied to present to the Citizens’ Jury, one Cheltenham Borough Councillor and REACH.  Against nearly four days of evidence from the NHS professionals, they were only given 15 minutes each to present their case!

REACH’s presentation contained 23 slides, but because of the imposed time constraint we chose to only present the 12 key slides.  Unfortunately, although one of the Jurors asked if REACH had anything more we wanted to add and we told them there were another 11 slides in our presentation, the Jurors decided not to accept copies of the full set of slides, because they had not been submitted in advance.

The reason REACH had not submitted the slide presentation in advance was a lack of trust and confidence in the public engagement process which is so heavily loaded in favour of the local NHS management.  Although the Citizens’ Jury was run by an independent Community Interest Company, they were employed by One Gloucestershire to organise the process.

REACH’s presentation was introduced by Julius Marstrand, a former Public Governor of the Hospital Trust for Cheltenham and Chris Hickey, a former Non-Executive Director of the Primary Care Trust.

Here is the FULL set of slides, both those we included in our presentation and those we left out on the day – One Gloucestershire – Citizens Jury – REACH presentation_21.01.2020

At REACH we are firm believers in making things as easy to understand as possible so below is an explanation of the slides.

Slid 3 – Outlining REACH’s lack of trust and confidence in the Public Engagement process, including the Citizens’ Jury process

Slide 6 – The need for an Emergency and Elective/Planned surgery split, to create capacity for Emergency General Surgery to be transferred to Gloucestershire Royal Hospital

Slide 8 – REACH’s case for a SYNCHRONOUS separation of Emergency and Elective/Planned Surgery, to create the necessary theatre and bed capacity at Gloucestershire Royal Hospital – something the transfer of six Neurological beds does not provide

Slide 10 – The need to have resident on-call Doctors – Anaesthetists, Physicians and Surgeons – available 24.7 on both sites

Slide 12 – What the Citizens’ Jury might want to find out about: ‘why was the overwhelming weight of evidence they received so heavily biased in favour of the Hospital Trusts position, when there are equally valid clinical objections to these proposals?

Slide 13 – Any Questions from the Citizens’ Jury

Slide 16 – A Venn diagram of the critical inter-relationships between the two main specialisms of Oncology (Cancer) Treatment and Cardiovascular Treatment at Cheltenham General Hospital and Gastroenterology, Upper and Lower Gastrointestinal Surgery, Gynaecological Cancer and Urology

Slide 21 – Acute Cardiac Intervention – so the 24/7 Cardiac facility does not have to be co-located with the major A&E Department at Gloucestershire Royal Hospital, but can continue to be located at Cheltenham General Hospital

Slide 22 – Reasons for maintaining the Centralistion of the Cardiac Unit at Cheltenham General (there have been suggestions if General Surgery is relocated to Gloucestershire Royal Hospital, this might make the relocation of Cardiovascular Care to Gloucester a necessity)

Slied 24 – REACH’s view on the need for Cardiac, Vascular and IR Centres on both sites.